When it comes to Asian flush there’s few main ‘cures’ out there. They typically fall under one of these categories:

This guide will look at what’s available out there and help you decide what is best for you.

The best Asian Flush cure really depends on what you you need. 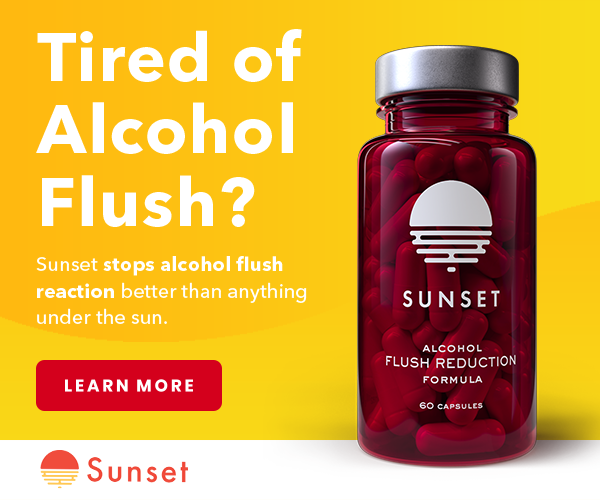 Note: The banner above is promoted

We are a society and culture website which focuses heavily on writing satirical content which speaks to the Asian diaspora across western countries. Using our comedic insights, we occasionally write useful content like this. This study uses the publicly available information on product websites in conjunction with our own personal experiences using the product. Any information in this guide is not a personal recommendation.

What's in this guide?

5 common cures for Asian Flush: How effective are they?

So, are you doomed to flush bright red whenever you want to enjoy a drink? There are a few different medications that claim to help or cure Asian Flush, but how effective are they?

What makes Sunset effective is because it uses two mechanises to help you fight with flush  1) histamine to help with the redness  2) ingredients to fight the toxins that come with alcohol).

There are 8 active ingredients in the treatment that contribute to those two mechanisms or help them work together.

This is the first cure that was created to directly address Asian Flush. In a recent study*, 50% of those who took it found that it reduced their symptoms a little. 38% found that it greatly reduced symptoms, and only 12% saw no improvement. Sunset is effective for any symptoms, from redness, headaches, and even hives.

Red Deuces is a great all around treatment as it combines more than one mechanism of flush treatment as it has two mechanisms to help you with the flush (anti histamine to reduce redness + ingredients to fight the alcoholic toxins) . It also includes ingredients to help with your hangover and some additional ingredients for Liver Support (which may be at risk when you take something for flush).

Redee Patch is a relatively new cure/prevention to the market. Instead of a pill, it is a wearable patch formulated with natural ingredients to help fight the flush as you drink. Reviews are generally positive, but like the other cures on this list, it works well for some people but not all.

A recent study* found that Zyrtec provided little-to-no benefits for those who took it. 62% who tried it didn’t feel that it made any difference, while 38% believed their symptoms improved a little. No one reported that Zyrtec noticeably reduced their symptoms. Zyrtec contains the antihistamine Cetirizine, which blocks histamine H1, but in order to be effective against Asian Flush, the antihistamine needs to block H2.

Zantac contains the right kind of antihistamine – the type that blocks H2. Those who tried Zantac reported that it reduced some dizziness and redness, but not consistently, and only temporarily.

*Study was conducted by Sunset Labs in 2019.

What is Asian Flush?

The Asian Flush is the name for what happens when some people of Asian descent drink alcohol and their face, neck, shoulders, or even their whole-body flushes pink or red. However, some people experience worse symptoms than some mildly embarrassing redness and feeling warm, such as:

Why does it occur?

It occurs because our bodies have to break down alcohol and it does so with two enzymes: alcohol dehydrogenase and acetaldehyde dehydrogenase. The first converts alcohol into acetaldehyde and the second metabolizes it.

People who get Asian Flush have a mutation in acetaldehyde dehydrogenase which makes it less efficient, which means toxins accumulate in the body. The flush occurs as a result of this accumulation. It can also be worsened by the body releasing histamines which increases blood flow and causes redness and itchiness.

Which Drinks Are the Worst?

Essentially, the higher the alcohol content, the more likely you are to react, because it is the by-product of alcohol that your body is allergic to. If you want to enjoy a drink and avoid a flush without taking medication to help, try nursing a beer instead of drinking shots.

Does it Run in the Family?

Research shows that generally, yes, it does. However, just because a parent suffers from it, doesn’t mean you will too.

Should I Avoid Drinking Altogether?

You don’t have to. However, you should be aware that there is some research that reports a higher risk of cancer for those who suffer from Asian Flush and drink a lot on a regular basis. If you like to have a fun night out – go ahead! – but skip having a beer or glass of wine with dinner each night.

Jimmy is the Senior Culture Enthusiast for The YAP Native. In other words, he is a degenerate who's lived and breathed the subculture of drugs, toxic relationships and 'bros' in the Asian-Australian experience.

Any cookies that may not be particularly necessary for the website to function and is used specifically to collect user personal data via analytics, ads, other embedded contents are termed as non-necessary cookies. It is mandatory to procure user consent prior to running these cookies on your website.